The latest news about the Bitcoin Scam worth $3.6 Billion (Rs. 26,700 Crores) is coming from Africa, where AfriCrypt, an Africa-based Crypto Currency holding company, has shut down its operations, and the owners have reportedly fled.

The Company is an official statement around two months ago, reported that its site had been hacked, and so it is temporarily shutting down its operations to prevent any loss of its users’ crypto. Since then, the company has not resumed its operations, and there is no information available on the company’s website.

From the look of it, it seems that the company has been planning this scam for a long time since it even asked its users to allow them some time and not file a complaint with the police stating that filing a complaint would lead to the locking of the holdings.

According to the local reports and reports from many media outlets, the whereabouts of both the company’s CEO and COO, namely, Raees Cajee and Ameer Cajee, are not known. The authorities have long been on this search. In the last conversation of the brothers with the users of the platform, they stated that there is a chance of crucial user information being compromised in this reportedly bogus cyber attack. The users have not heard from the brothers ever since. The phone and mobile numbers of the brothers are also unreachable and have been forwarded to a voice mail. The brothers are just 21 and 17 years old, respectively. 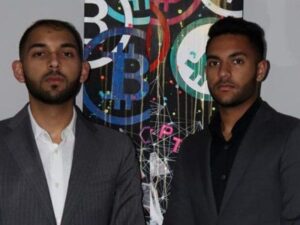 The brothers have time until July to file a claim against this appeal, or they will have to face legal consequences. The claim has been filed by a group of 20 people who hired a law firm for filing this complaint, and the South African courts have ordered the liquidation of the company at the earliest.

Oosthuizen, the lawyer for the Cajee brothers, told in an interview that the company had undergone a cyberattack, and the brothers have not fled with the money. However, the case of a cyber-attack never came to the police. The lawyer also states that the huge figure of $3.6 billion is overestimated and states that the case is, infact, just about a few million dollars. The lawyer ensures that the brothers are willing to co-operate with any investigation.

Zakira Laher, who is a cousin of the Cajee brothers and a former director at Africrypt, has been quite troubled with the heavy inflow of investor calls and investigations from the Police and Media itself. Laher reports that the brothers liked to lead a luxurious life which is normal considering the amount of money they have been earning from the company. In the meanwhile, the registered office of Africrypt was also seen to be having a To-let sign.

The company was started in 2019 and grew tremendously popular from word of mouth and their lucrative schemes. The African legal and financial authorities are saying that they can’t do much since cryptocurrency is still not regulated and cannot be bought under the law currently. They assure that adequate action will be taken.

FAUG Launches New TDM mode-Will It Be Able To Compete With PUBG?

1 thought on “The Owners Of This African Company Disappeared With Rs. 26,700 Crore worth of Bitcoin-Check The Details Here”

How To Earn Money From Paytm?

With the Indian government’s decision to takedown Rs. 500 and 1000 currency notes, the digital payments industry in India has seen a tremendous boom. One...

How To Earn Money From Snapchat 2021

Snapchat is one of the most popular social media network/messaging app among youngsters. Snapchat has the largest demographic of the youngest users i.e from 18-24...

How To Earn Money From Telegram

Telegram is the biggest messaging platform after Whatsapp, with 500 million actives users as of 2021, the platform is well known for its privacy-oriented features...

Youtube is the world’s biggest video-sharing platform with over a billion registered users and even more unregistered users. Youtube was started in the year 2005...

Launched in 2010, Instagram is one of the most popular social media platforms globally, with a user base of 1.8 Billion people (approx.). Social media...

How to Build Your First Online Asset

For all of my talk about the three-step process of building a business, there’s something to be said for the fact that it’s so freaking...

You may have missed

How To Get Go Mauro Filter On Instagram/Reels

How To Earn Money From Paytm?